Posted on September 16, 2018 by medicalquestionsandanswers.info

We’ve been working on helping ourselves and our readers to better interface with the health care professions and professionals for more than 10 years now, and would have thought that we could no longer be surprised by anything new we might find out – but what we’ve learnt recently about how people are getting along in dealing with aged health care facilities and people, and the help governments are providing, or not providing, in relation to same, has left us shocked!!! No wonder it’s been reported today that Prime Minister Morrison has announced that there is to be a Royal Commission into Australia’s aged care sector.

It’s been reported that the Commonwealth’s Aged Care Complaints Commission received 4,713 complaints in the year ended 30 June 2017, and if, as we suspect, no information is ever to be made available to us the people as to the nature of any of these complaints, which facilities they were about, and what was decided, to us that’s truly appalling.

In an attempt to have the situation clarified, this letter was sent to the Commission by email today:- 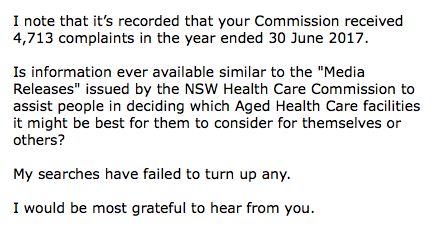 Received a reply the next day.