Being on Low Dose Naltrexone 3

Further to our previous posts on Low Dose Naltrexone, (described by some as perhaps the most significant medical breakthrough in 50 years,) we’re becoming more and more flabbergasted by the lack of interest in it, even the opposition to it, by prospective patients, and even doctors.

As we’ve said in a previous post, one of our readers, a retired GP, says that he’s read claims that it takes 17 years!!! on an average, for medical breakthroughs to become common medical practice, and horrific as this may seem, what is even worse is that there are special reasons why advising on and prescribing Low Dose Naltrexone may NEVER become common medical practice.

One of our readers, (who says he’s been on Low Dose Naltrexone for nearly 14 months now,) claims that he has three copies of the book, “The LDN Book,” which he’s bought to lend to people, and every time he goes to see his GP, (who he claims is the best GP he’s ever had,) he takes a copy and offers to lend it to her, but she’s not interested.

And this same reader claims to have emailed what’s shown below to a Sydney Urologist nearly 3 weeks ago. He says that this particular urologist has been SO helpful over the years, and SO into communication, and that if anyone was going to provide a response showing any interest, it would be him. But no – nearly three weeks later, it hasn’t even been acknowledged. 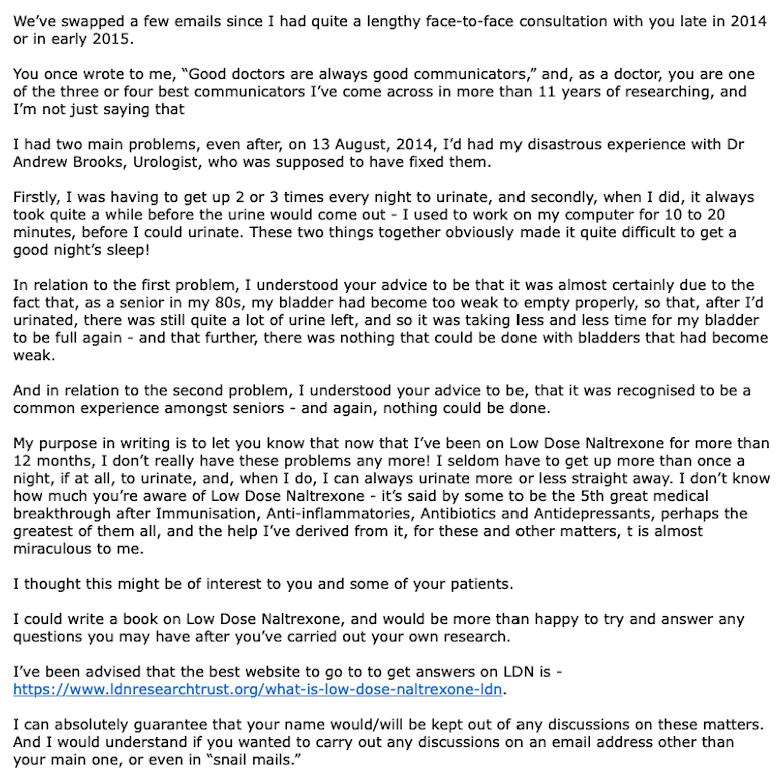 SO! a Urologist, who one of his patients says he’s always found to be an excellent doctor and really into communication, when the patient takes the time and trouble to send him an email claiming that he’s discovered a medication that has largely fixed two problems that he’s had, which the Urologist, himself, and others have told him can’t be fixed in people of his age, and the email isn’t even acknowledged!!! What is going on???