Posted on April 1, 2018 by medicalquestionsandanswers.info

The following is part of a 12 Mar 2018 article on the alleged circumstances in which a couple went to the  Fairfield Government hospital for help in delivering their baby and found themselves having to deliver the baby themselves, with no help whatever, and the baby died.

You can see that it is claimed that the Minister for Health has said that everything has been done to make “sure that it won’t happen again.”

This when, it seems that the CEO of the hospital, whoever he or she is, isn’t convinced – at least not enough to reply to this letter emailed to him or her 4 times in the last two weeks, which they haven’t even acknowledged, let alone replied to. 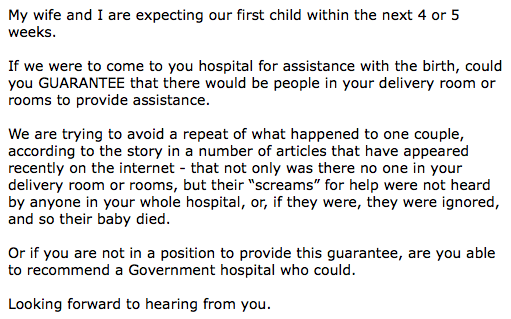 To us this is signalling that probably nothing has changed!