Posted on July 15, 2018 by medicalquestionsandanswers.info

We have written extensively about the story of how,  back in November 2014, a Mr and Mrs Amone went to the Fairfield Government hospital for help in having their baby, and got none, and the baby died, and of how it seems that nothing has changed in the almost 4 years since – how there doesn’t seem to be a Government hospital in the whole of the western suburbs of Sydney, perhaps the whole of Sydney, which offers any sort of guarantee that this wouldn’t happen again in their hospital, and it seems that no one cares.

Julie Owens, the Federal Member of Parliament, recently sent out a letter providing information on a number of  “meet and greet” occasions she was holding in which she will be accompanied by Liz Scully who is to be a Labor candidate in the 2019 NSW State election. Whoopee! So exciting!

This led us to try and find an ordinary email address or at least an email form to perhaps use to raise issues with Liz Scully – without success! We only found the contact facility on her FaceBook page, which we used, even though it wasn’t easy. At least Julie Owens has an ordinary email address, which we used to send her this, 11 days ago, on 5 Jul 2018, setting out what we had sent to Liz Scully. 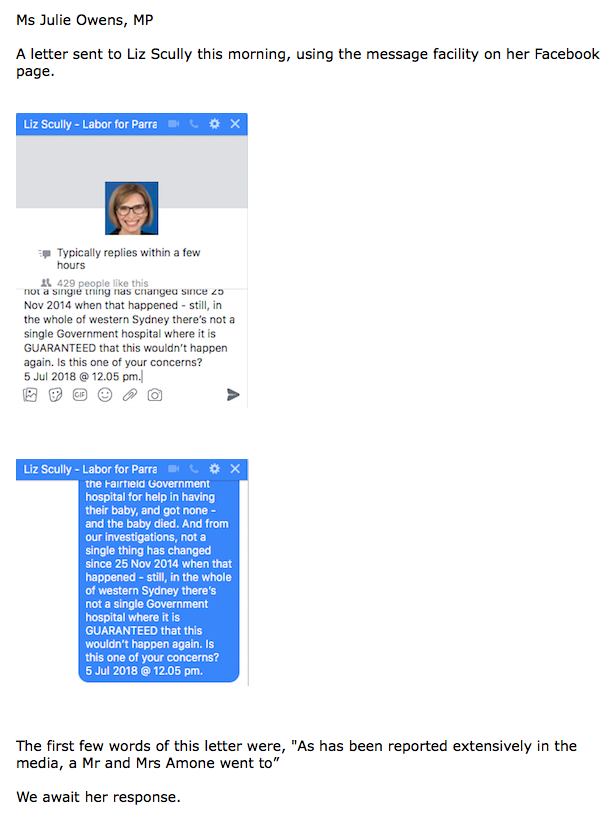 So there you are readers. If anyone votes for her to get into Parliament, this shows how they will get on if they seek to raise any issues with her.

She obviously thinks she can be like this and still be elected. She may be right!