Posted on July 30, 2018 by medicalquestionsandanswers.info

As part of our work on this blog we have just spent quite a lot of time viewing some of the ratings on the internet on Obstetricians and Gynaecologists and some of them are nothing short of sickening, many quite distressing – if we are to allow them any credibility at all. And none more so than a number of the ratings on one of the specialists at Primary IVF, an Australian wide organisation claiming to be “Fertility Specialists.” 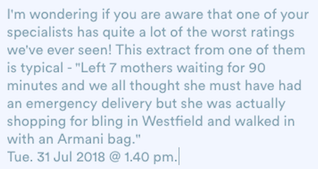 We would have thought that, pending a satisfactory response to this enquiry – like advice that this particular person has been sacked – this organisation should be avoided like the plague.

We’ll let you know if we get a response at all.

As we’ve said before, we are often not sure how we should view ratings, and often don’t take much notice of them – perhaps a lot of them are bogus. But we recognise that if patients do have a bad experience with a doctor, putting a bad rating up on the internet about them is often about all they can do, with the so-called regulatory agencies, like the NSW Health Care Complaints Commission being so excruciatingly bad, and the management of the organisations in which they work not caring a damn.

What’s intriguing about this instance is that, usually, when a doctor has a number of bad ratings, the bad ratings are quickly outnumbered by those in which they are described as perhaps one of the best doctors in the history of Christendom – in this case there are only 7 like that, along with the 19 that are not so good, most of them incredibly bad.