Posted on December 1, 2019 by medicalquestionsandanswers.info

Further to this post, do we have to emphasise the following?

(1) That when the young man concerned first entered the Royal North Shore public hospital, it may well have been that he had pneumonia then, and that a lot of his problems may have arisen because he wasn’t treated then for pneumonia, but this wasn’t “picked up” by the hospital i.e. he was misdiagnosed.

(2) That the antibiotics he was given in the Royal North Shore public hospital didn’t seem to work. Do antibiotics sometimes not work? – or was he given the wrong antibiotics?

(3) That although drains were put into his lungs to drain excess fluid out of them, no drains were put into his chest to drain the 3 or 4 litres fluid, no doubt infected, that had built up around his lungs, to the point that one of them was completely squashed, perhaps explaining the horrific pain he continued to suffer. Perhaps the fact that after 3 days, only 1100 mls of fluid had drained out, should have alerted someone to the possibility that one or more other drains should have been put in elsewhere.

Obviously, in all of this, we’re relying entirely on emails from readers, which is why we’re giving the management of the hospital and it’s doctors the opportunity to tell their sides of the story – knowing, as we do, from previous experiences, that the chances that, under the Berejiklian government, anyone would utilise these opportunities are nil.

But two things we find scary.

Firstly, that there’s such a conflict of interest in relation to these matters – the more horror stories there are about, the more people who need hospital treatment are going to strive to only use private hospitals, if they can afford it, and that saves the government money. Pity about the ones who can’t afford it!

Secondly, that there are also lots of horror stories around about private hospitals, particularly Ramsay Health Care Hospitals, of which the Royal North Shore hospital is one. We hope and pray, that the worst is over for the young man we’ve written about, and that, as foreshadowed by the doctor who carried out the 3 hour operation in the second hospital, and that his life is back to normal within within 6 to 8 weeks.

In the meantime, below is a photo of the young man walking on the second day after his operation – with, in the words of his grandmother, “three tubes attached to his chest, carrying oxygen, antibiotics, fluids and oxycodone.” 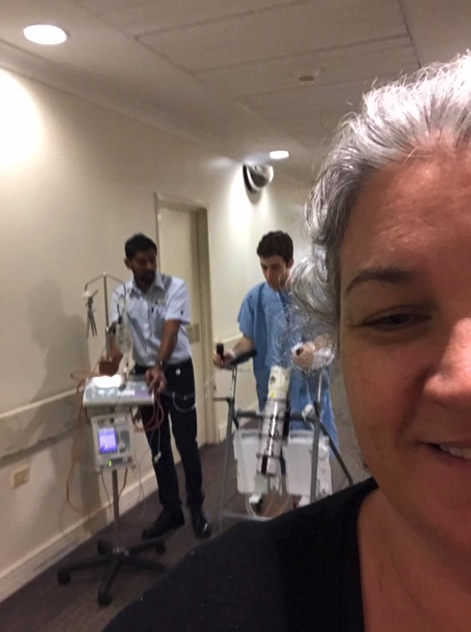