The NSW Ministry for Health in action

Posted on October 31, 2019 by medicalquestionsandanswers.info

As has been reported, a couple went to the Fairfield Government hospital for help in having a baby and got none, and the baby died. Sure, the hospital may have been busy, but, to us, those responsible for giving everything else in the hospital at the time higher priority than helping a couple deliver a baby should be in gaol for manslaughter.

And when we wrote to Health Minister Hazzard asking if he cared, this is what we got back. 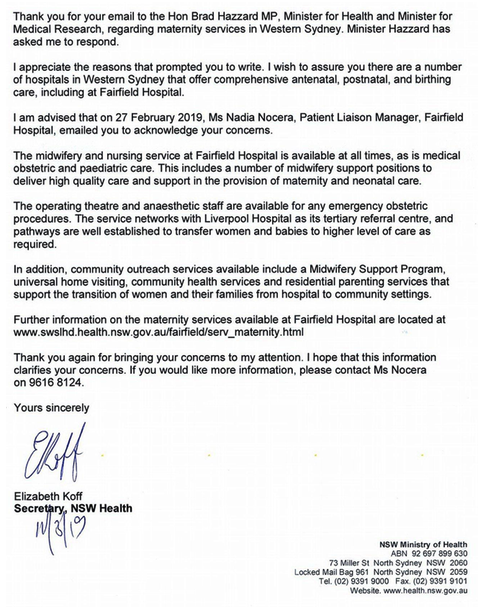 To us, this, as a response to any concerns there might be about a couple going to a Government Hospital for help in having a baby, and the baby dying as a result of them having got none, is ATROCIOUS RUBBISH – and tells us everything we might need to know about the NSW Ministry of Health, Minister Hazzard and, indeed, Premier Berejiklian.

Putting it another way, we think the people of New South Wales are in a lot of trouble if we  have a government that thinks this is an adequate response to the issues involved.

To us, it’s on a par with the response from the Coroner who looked into the matter, which boils down to – “Cheer up folks – the baby would have died anyway.”

To us, the worst thing about all this is that it sends a message to those at Fairfield Hospital that nobody cares how they perform. At the very least, we think that they should have received a “Please explain” email from Minster Hazzard, even if no action was subsequently taken.