Posted on October 29, 2018 by medicalquestionsandanswers.info

We have become totally fascinated by the situation that the developments in communication over the last 30 years or so have brought about, which we’re describing as a “tug of war.”

The following is an example of this “tug of war.” 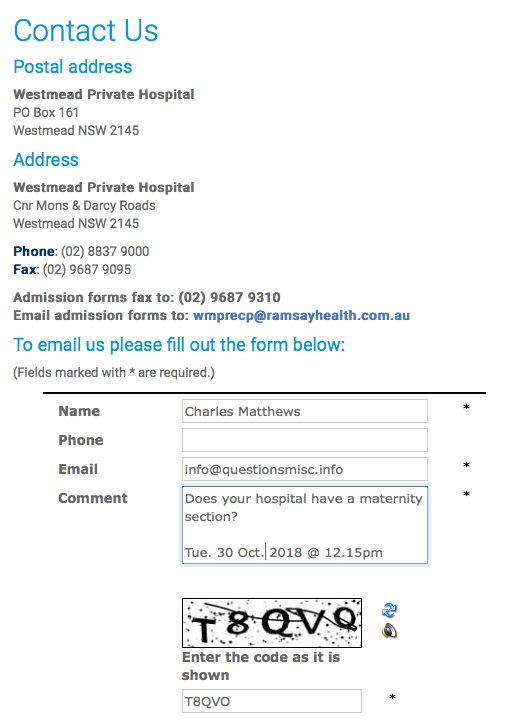 To us, email forms are not nearly as good as ordinary email addresses, but sometimes, as in this case, you have no choice.

You will notice that we’ve included the day and the time in the comment we’ve made – something that we always do when using email forms.

(With most people and organisations, of course, when you use an email form an ordinary email address as part of any responses you get, which you can use in the future. But with some really low grade organisations, like the Australian Health Practitioner Regulation Agency, AHPRA, you are specifically told that the ordinary email address that’s used to provide responses you get can’t be used for any future correspondence – you have to use email forms again and again and again.)

16 minutes later we got this response, from Alice on the switchboard:- 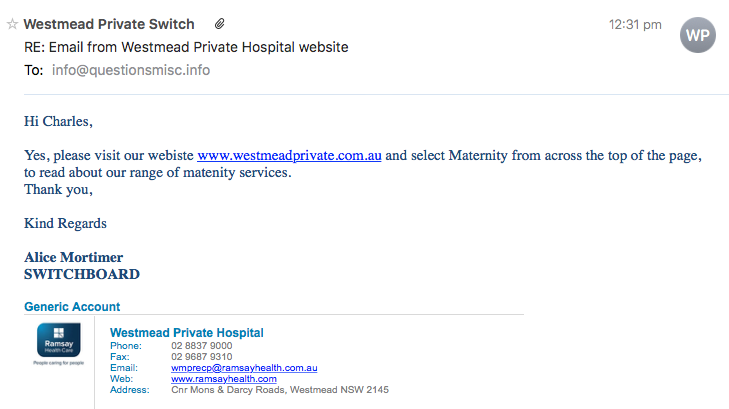 This response was sent back:-

We’re waiting for a response. It will be interesting to see whether, (1)  there’s a specific email address for the Maternity Section, (2) whether if there is, the people on the switchboard know it, (3) whether if there is and the people on the switchboard know it, it will be passed on to be used to email the Maternity Section direct, or (4) whether anyone will just pass our email on to them as has been requested.

In situations like this in the past inane responses have been provided like, “You can email them direct if you like,” – without an email address being provided!!!!????

In the end, it will come down to the hospital deciding whether it still will be getting couples coming to their hospital for help in having their babies without answering this question

Of course, in a sense this “tug of war” is entirely academic – we, the people, our readers and us, should be just concentrating on searching and searching for people and organisations who provide THE BEST responses to email sent to them, and only dealing with them. Which is what this blog is all about.