Email addresses on the University of Sydney’s website – do they work?

Posted on April 21, 2020 by medicalquestionsandanswers.info

With lots of NSW doctors, if you Google their name, one of the results that come up is like this.

How likely is it that emails sent using ordinary email addresses like these are actually received by the addressees? In the past we’ve contacted the University to clarify this, and the answers we’ve got haven’t exactly been clear cut.

Over the years, we’ve found that if we haven’t even received an acknowledgement of an email sent using an ordinary email address on a doctor’s own website, (or other people’s own website, for that matter,) within 14 days that ALMOST CERTAINLY the recipient is a crook or, at least, incredibly slack, and that it’s a CERTAINTY that, if need be,  they’ll say that they’re prepared to swear on a stack of Bibles that they never received it.

Dr Brooks is an interesting example. We’ve related before how, to avoid getting into trouble with the NSW Privacy Commissioner for not responding to emailed requests for copies of documents  which he was required to provide by law, he claimed that the ordinary email address on his website was set up so that it “weeded out” emails from patients so that he didn’t receive them. (Accepted by the Privacy Commissioner as a reasonable excuse, of course!) Over the years we’re aware of at least 30 emails being sent to him, and he’s responded to only one, with details on how to pay him his $3,200 fee for less than un hour’s work, which, of course, he wouldn’t have received if his claims about how the email address on his website was set up were true.

And all of these emails were also sent to the address on the University of Sydney website as shown above. So did he get them?

Today we’ve sent a couple of emails to the University of Sydney using email addresses that we knew were no longer current, and we’ve got responses like the one shown below – the implication, of course, being that, if an address was used that was still current, that it WOULD have been delivered. 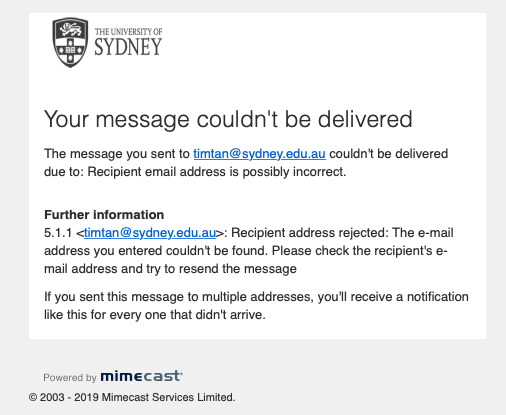 Of course, if emails are sent using email addresses that are shown on the university’s website and it’s never indicated that they haven’t been delivered, and they aren’t delivered, it would be disappointing, to say the least – in fact, we would think it would be outrageous!!!

And, of course, if you use email addresses on doctors’ own websites you should know for sure that they worked. In this regard, Brooks has taken the ordinary email address that used to be on his website down, but it could still be used if you knew what it was, but now emails sent using to it are returned – so all you can use to contact him is a fax number, so primitive and last Century, and the address on the University of Sydney’s website, which, he simply refuses to acknowledge he’s received.

To us it’s so obvious that it’s better to use doctors who have ordinary email addresses you can use to communicate with them if necessary, and, other things being equal, it’s complete and utter madness to use doctors like Brooks.

We will continue our investigations!