Posted on July 5, 2018 by medicalquestionsandanswers.info 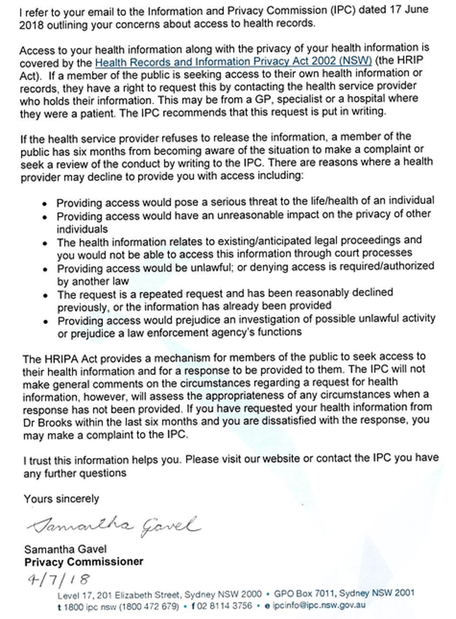 We are completely flabbergasted, and almost can’t stop laughing! If any of our readers can point out even one word in this response that relates to the email we sent, they deserve a medal!

Not only did Ms Gavel’s predecessor, Elizabeth Coombs, accept Dr Brooks’ excuse for not responding to a number of one of his patient’s requests for copies of his health records to which they were entitled by law, but it would seem that Ms Gavel would do the same.

(The Dr Brooks’ excuse was, “Oh, we didn’t get those emails. My email address is set up so that emails from patients are weeded out and I don’t get them,” to which Ms Coombs’ response was, “Oh yes, Dr Brooks, that’s a perfectly understandable and acceptable excuse for you to persist in refusing to respond to your patients’ request for copies of the medical records to which they were entitled by law.” This, not withstanding that the Dr Brooks excuse was clearly a black and white lie, in that (1) technology people advise that it’s not possible to for an email address to be set up in the way he described, and (2) that the patient had a copy of an extremely prompt response to an email he’d sent him, using the same email address, asking how to pay him some MONEY!)

Perhaps the greatest concern is that perhaps none of Ms Gavel’s people have the intelligence to understand what we’re even talking about, least of all Ms Gavel herself.

And women like Ms Gavel are in charge of an important part of the regulation of NSW doctors!!!!!