Posted on May 9, 2018 by medicalquestionsandanswers.info

A number of articles have appeared in the media recently like this. 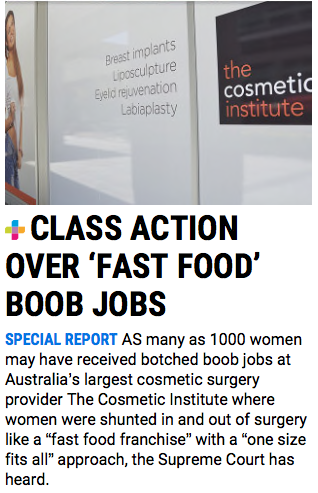 In some ways we almost can’t believe that as many as a thousand women, perhaps more, could have been “sucked in” by the promotional tricks of the Cosmetic Institute – could believe that their trust in this organisation would end up with things going so badly for them.

There would have been so much stuff on the internet about the Cosmetic Institute and it’s Dr Eddy Dona, some of which we put up ourselves, (we did SO much work on it,) that might have warned them.

But now if you do a Google search on “Cosmetic Institute” a website with this name can’t be found, you are taken to this website – http://www.cosmeticevolution.com.au. Is this organisation related to the old Cosmetic Institute? Is it just as bad?

Are we to believe?

It’s ironic that once, if you wanted to ensure that you only saw the best doctors and avoided seeing the ones who perhaps weren’t the best, you mainly had to rely on word of mouth. And that if you had a business that you wanted to promote you often had to mainly rely on word of mouth. And that while modern technology has made it so much easier to ensure that you only see the best doctors and avoid seeing the ones who perhaps aren’t the best, that that same technology has brought with it so many things that the crooks can use to trick and deceive us!

And when we say that “in some ways we almost can’t believe that as many as a thousand women, perhaps many more, could have been “sucked in” by the promotional tricks of the Cosmetic Institute,” it’s only 3 or 4 years ago that one of our readers says he was like these women. He says that in many ways he’s grateful that he only fell into the hands of ONE of the doctors who are total crooks – he says this doctor tricked him into surgery, which was totally wrong, and which carried with it the inevitable side effect that he would be damaged for life, it can’t be reversed, all so he could get his fee of $3,200 for less than an hour’s work. Our reader says, “NEVER AGAIN,” he hopes!