Posted on October 25, 2018 by medicalquestionsandanswers.info

Over the last 4 months and 7 days, i.e. in more than a third of a year, when this Commission is, according to it’s own records receiving more than 200 complaints a year, the majority of which, you would think, would be about doctors, it’s put up on it’s website 6 Media Releases – see the screen shot below.

So, in more than a third of a year, in the face of goodness knows how many complaints about doctors, not one currently practicing doctor has been found to have done not a very good job.

It wouldn’t surprise us if Commissioner Dawson and her people at the HCCC are operating  under a brief personally provided by Premier Berejiklian herself – “Don’t find too many doctors to have done not a very good job – people might start thinking that we haven’t got a brilliant health care system in New South Wales.”

In a word – we’re disgusted!

A couple of times lately we’ve been taunted by doctors saying, “Oh, you obviously haven’t got anything to complain about – otherwise you would have made a complaint to the Health Care Complaints Commission.” What? and waste all that time and effort? 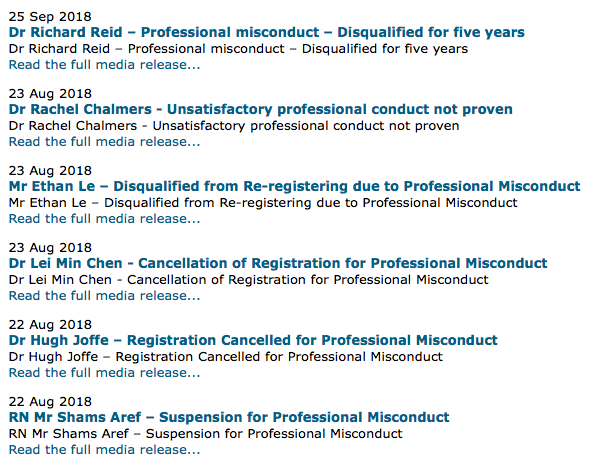