One of the things we’ve find profoundly disturbing recently, is how Coroners have responded following their investigation into two relatively recent deaths.

In the case of a 13 year old boy, who was discharged from the Concord government hospital at 1.30 in the morning, so sick that he couldn’t walk, he had to be taken in a wheel chair to a waiting car, so close to death that he was dead in less than 13 hours later, the coroner concluded that the concerns of the boy’s parents should have been taken more notice of – nothing about anything within the hospital. So what were the parents supposed to do? – jump up and down when the orders were given that their son be discharged?

And, in the case of a couple going to the Fairfield government for help in having a baby, and got none, the couple had to try and deliver the baby themselves, and the baby died, it seems to us that the Coroner’s finding boiled own to, “Cheer up, the baby would have died anyway.”

But, the thing that we find easily the most profoundly disturbing of all is that, when we emailed Brad Hazzard, the Minister for Health, to see if he cared about any aspect of the circumstances of the baby dying in Fairfield Hospital, this is what we got back – totally inadequate rubbish!!! 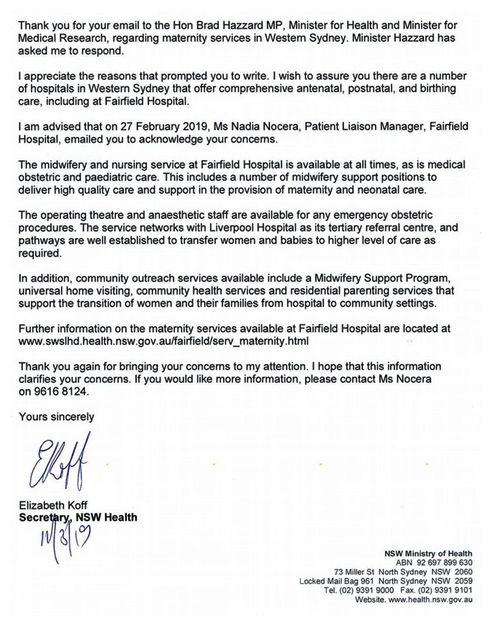 It seems that Ms Koff, whoever she might be, is claiming that all’s well after all, and that this claim has the approval of Minister Hazzard, and perhaps Premier Berejiklian.