Who can we TRUST?

Posted on July 2, 2018 by medicalquestionsandanswers.info

There’s been lots of articles in the media in the last couple of days about the claims of a Roman church alter boy that, after being abused by one of the church’s priests, he’d told a Philip Edward Wilson, who was a priest much higher up in the church’s hierarchy, about it, and Wilson had done none of the things he should have done with what he’d been told.

Wilson, who would have been only about 54 at the time, suggested, when in the witness box during a court case on the matter, that the alter boy must have been lying because if he’d been told any such thing, he would have remembered it – see this from one of the articles:- 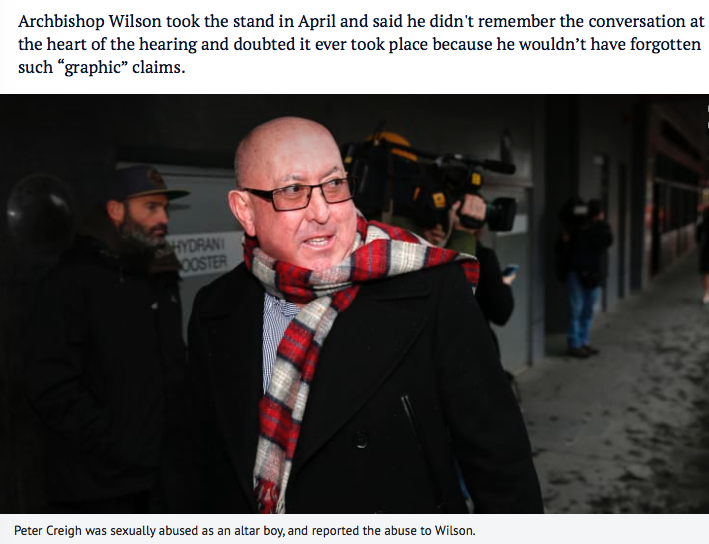 But the court found that Wilson HAD been told, whether he remembered it or not, and that if anyone was lying, it certainly wasn’t the alter boy.

Of course, a court case wouldn’t have been necessary if the church had had an ordinary email address readily available, to which the alter boy could have sent his  story – he could have just said, “Here’s a copy of my email.”

Of course, thirteen years ago, the church may not have had such an email address. But our guess is that it STILL wouldn’t have such an email address, in 2018! (If we’re wrong about this, we’d be grateful if any of our readers could let us know, so we could let others know – we just don’t have the time or resources to go hunting for one.)

It’s an obvious thing to say that there is mounting evidence that thousands and thousands, if not millions and millions of people TRUSTED many in the Roman church, when they shouldn’t have. And to this can be added that, with modern technology, it’s very hard for people and organisations to develop a reputation for TRUSTWORTHINESS, if they don’t have an ordinary email address readily available, which people can use to raise issues, and if they use them to raise issues, they won’t just be ignored, they will get responses that are upfront and honest, not tricky and devious.

And this doesn’t just apply to the Roman church. To us it’s SO interesting, even exciting, that also the Telstras, the AMPs, the big Banks, the Ramsay Health Cares, and so on are being found out by people using modern technology – that more and more it’s possible for the people to live their work and private lives surrounded by people they can TRUST, not by the shoncks.

An update: According to the latest media reports, “Adelaide Archbishop Philip Wilson has been sentenced to a minimum of six months imprisonment for concealing the historical indecent assault of two alter boys by paedophile priest James Fletcher in the 1970s.” Sky News. 3 Jul. 18.

We hadn’t previously realised that what Wilson did can be described as “concealing,” and that “two alter boys” were involved.

His defence people had argued that he shouldn’t be sent to prison as he might be assaulted in prison – perhaps like the two alter boys had been assaulted.